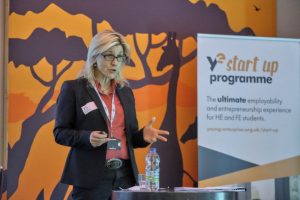 Young Enterprise are proud to announce they have appointed Sharon Davies as the new CEO.

Sharon, who has been COO of Young Enterprise for the last 7 years, has been responsible for leading the charity’s operations from programme delivery to the support of staff, volunteers and centre leads.

Sharon is passionate about the future of the younger generation, having worked as a youth worker for over 15 years in the North West, and is deeply committed to changing lives through addressing inequality of access to opportunity.

As she takes up the role as Chief Executive, Sharon launches a brand new campaign for Young Enterprise which will shine a light on why there’s never been a more urgent time to ensure young people are empowered to thrive and to fulfil their potential.

The new CEO is a graduate of Liverpool John Moore’s University, a post graduate of Leicester University and an MBA qualified Director. Prior to joining Young Enterprise, she led the Connexions service in North Cumbria.

Michael Mercieca, who stepped down on the 31st October, has been leading the charity since 2012. In July, Young Enterprise announced that Michael will be joining the international charity Junior Achievement Worldwide as a consultant to work on partnership development.

Sharon Davies commented, “My journey and experience as a teenager are the key drivers behind the passion and commitment I will bring to my new role as CEO. Young Enterprise impacts hundreds of thousands of children’s lives a year, but it is vital that now more than ever, we ensure young people are provided access the enterprise and financial skills that can shape their careers and transform their futures.

Research shows that the UK is one of the most economically unequal societies in Europe and levels of income inequality is likely to increase further into the early years of the 2020s. Through Young Enterprise we can make a true difference to more lives, which is why we have launched the ‘No Time Like The Future’ campaign.

I am proud to be part of Young Enterprise and I look forward to working closely with the team, teachers and volunteers around the country to further our financial and enterprise education offering.”

Micheal Mercieca said, “I am extremely proud to be handing the baton to Sharon Davies. She has been an incredible part of the team and has played a key part in the growth Young Enterprise has had in its reach, diversity and impact nationwide.

Sharon is the perfect candidate to continue leading Young Enterprise’s mission and taking the organisation to the next level – bringing equality to the forefront so that talented young people across the country have the opportunity to succeed.”